What will it take to achieve the Sustainable Development Goals by 2030? 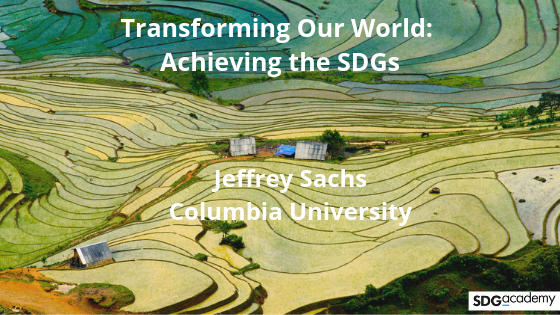 What will it take to achieve the Sustainable Development Goals by 2030?

Introduction: The Sustainable Development Goals and the Transformation of Our World

--An Introduction & The Official Text

Chapter 1: Getting to Know the Sustainable Development Goals

Jeffrey D. Sachs is a world-renowned professor of economics, leader in sustainable development, senior UN advisor, bestselling author, and syndicated columnist whose monthly newspaper columns appear in more than 100 countries. He is the co-recipient of the 2015 Blue Planet Prize, the leading global prize for environmental leadership. He has twice been named among Time Magazine’s 100 most influential world leaders. He was called by the New York Times, “probably the most important economist in the world,” and by Time Magazine “the world’s best known economist.” A recent survey by The Economist Magazine ranked Professor Sachs as among the world’s three most influential living economists of the past decade. Professor Sachs is widely considered to be one of the world’s leading experts on economic development, global macroeconomics, and the fight against poverty. His work on ending poverty, overcoming macroeconomic instability, promoting economic growth, fighting hunger and disease, and prom